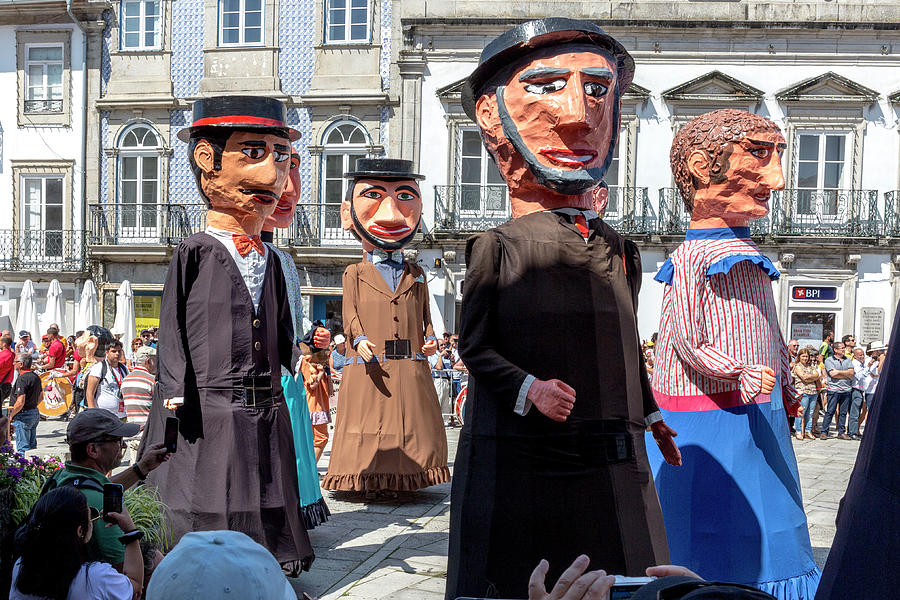 The Portuguese tradition of Gigantones (or giants) dates back to 1265. They are usually hollow figures several meters tall, with bodies covered in cloth and other clothing. Their frame is usually made of wood or aluminum, and a mixture of papier-mâché and plaster of Paris is used to make the head and hands, which swing freely. The individual inside carries the giant supported on his shoulders via a harness.

The Cabeçudos or big heads, are human scale, smaller figures that feature an oversized, papier-mâché head. They chase each other, and sometimes children, around.

The Gigantones e Cabeçudos, as they spin and dance about, are accompanied by “Grupos de Bombos”, or very LOUD drum groups. Multiple grupos de bombas, each composed of 20 or more drummers carrying 10 or more large bass drums and just as many tom-toms, arranged themselves around the periphery, where they slowly marched counterclockwise around the Praça. There seems to be a competition as to who is the most energetically loud. The name Grupos de Bombos seemed rather appropriate if translated (somewhat incorrectly) as ‘Groups of Bombs’, because of their intensity, energy, and volume.