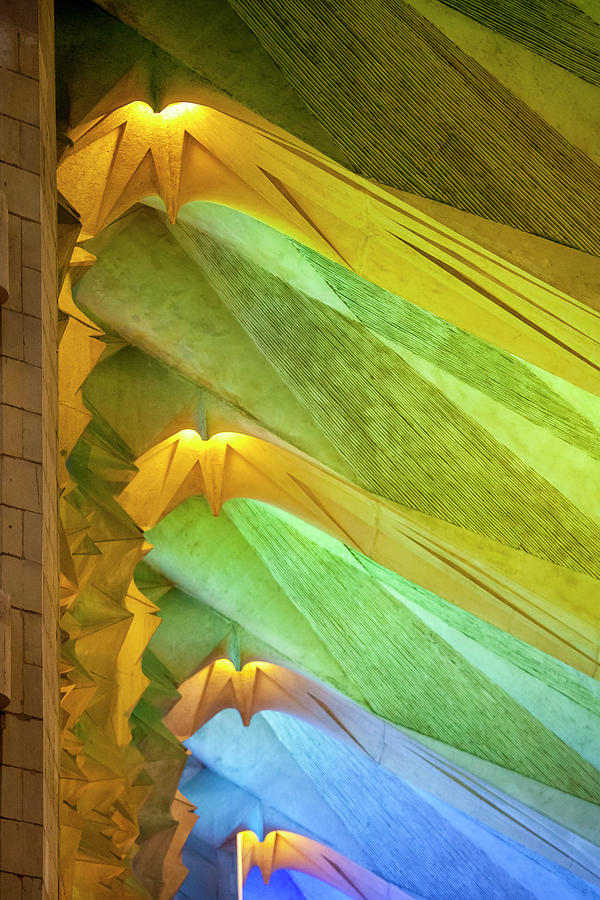 Colored light, passing through the stained-glass windows along the side aisle of the Basílica de la Sagrada Família - Antoni Gaudí

Of all of Barcelona’s magnificent architecture, Antoni Gaudi's (1852-1926) spectacular UNESCO-listed La Sagrada Família inspires awe by its sheer verticality. Approaching the Sagrada Familia has been described as looking “too much like a tacky theme park- part-sandcastle, part-spaceship”.
In the manner of the medieval cathedrals it emulates, it is still under construction. Indeed, work that began in 1882 is hoped (perhaps optimistically) to be completed in 2026, a century after the architect's death. Though it is still unfinished, the cathedral attracts more than 4.5 million visitors a year and is Spain’s most visited monument.
Walking through the “Nativity façade” one enters a space more remarkable than you could have ever imagine. Soaring columns resembling massive tree trunks rose and branched to support the ceiling that is covered with a geometric canopy of stylized leaves and stars. The modern, massive, arched stained-glass windows glow brightly with all the colors of the rainbow illuminating the interior with the hues of the heavens.
The magnificence of Gaudi’s vision was obviously based on the natural world. In his designs one could imagine the structure being inspired by forests, animal skeletons, shells, seeds and myriad other structures from nature. Indeed, he once said “originality consists of going back to the origins.”

Congratulations on your sale!

Great photo! Congratulations on your sale!

Congratulations on your sale!

Congratulations! Your fantastic photographic art has been chosen as a Camera Art Group feature! You are invited to archive your work in the feature archive discussion. There are many other discussions in the group where you can promote your art even further more.