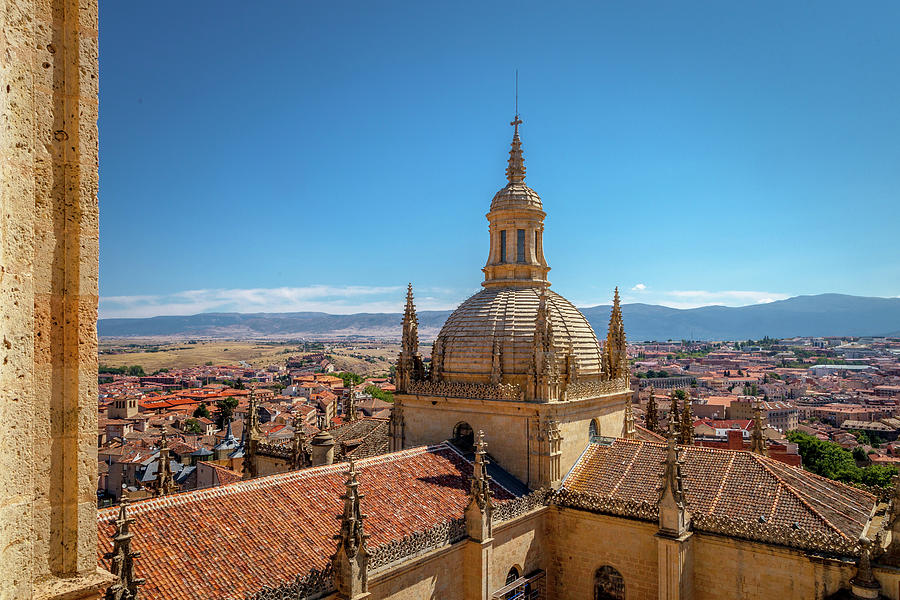 A View of Segovia's Cathedral

A View of Segovia's Cathedral

As viewed from the bell tower, the dome and spires of Segovia's cathedral stand out against the blue Spanish sky with the peaks of the Sierra de Guadarrama rising across the plains.

Officially known as the Santa Catedral de Nuestra señora de la Asunción y de San Frutos (The Holy Cathedral of Our Lady of the Holy Assumption and Saint Frutos). The Segovia Cathedral was begun in 1525, after Segovia’s old cathedral was destroyed in the Revolt of the Comuneros in 1520 and took almost 200 years to complete. The current structure was constructed in the former Jewish Quarter, away from the 16th-century Alcázar where it would be out of harm’s way.

Despite being built in the renaissance, this magnificent building was constructed in an old-fashioned gothic style, and is considered one of Europe’s newest original gothic structures.

Segovia is a provincial capital in the autonomous community of Castile and León, Spain. It is the enchanting home of the famous Alcázar palace, the famous Segovia aqueduct, several Romanesque churches, and of course, the cathedral.